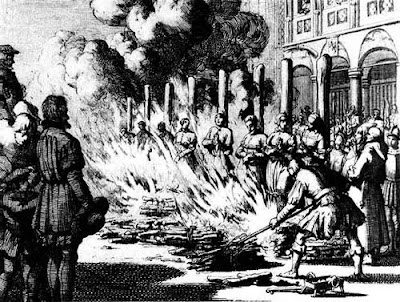 The Haunted: As Halloween nears, ghoulish thoughts of public official corruption haunt Liberty County. The continual stream of evil, corrupt acts and political, selective prosecutions by Judges and prosecutors are reminiscent of the Salem ‘witch trials’. Liberty County Officials choose to persecute those who speak out just like the 'crucible' and Salem ‘witch trials’.

In June of 1692, the special Court of Oyer (to hear) and Terminer (to decide) sat in Salem to hear the cases of witchcraft. Presided over by Chief Justice William Stoughton, the court was made up of magistrates and jurors. The first to be tried was Bridget Bishop of Salem who was found guilty and was hanged on June 10. Thirteen women and five men from all stations of life followed her to the gallows on three successive hanging days before the court was disbanded by Governor William Phipps in October of that year. The Superior Court of Judicature, formed to replace the "witchcraft" court, did not allow spectral evidence. This belief in the power of the accused to use their invisible shapes or spectres to torture their victims had sealed the fates of those tried by the Court of Oyer and Terminer. The new court released those awaiting trial and pardoned those awaiting execution. In effect, the Salem witch trials were over.

As years passed, apologies were offered, and restitution was made to the victims' families. Historians and sociologists have examined this most complex episode in our history so that we may understand the issues of that time and apply our understanding to our own society. The parallels between the Salem witch trials and more modern examples of "witch hunting" like the McCarthy hearings of the 1950's, are remarkable.

The Witch Hunt: Like the Salem 'burning times', evil Liberty County judicial elements persecute its political and personal enemies though "witch hunting". The continued ongoing "witch hunt" is a way for those who are in power to control those who are “not” in power- with civil and mostly trumped-up criminal prosecutions.

The Scapegoats: Judges and the Liberty County District Attorney (Mike Little) have persecuted many for political reasons, personal reasons and fear of the truth being made public. It brings to mind a befitting saying posted at the entry to the Salem Witch Museum, "fear + trigger = scapegoat".

The people you speak of are a Liberty Courthouse "Cabal".

the liberty courthouse has a dark cloud over it

You may be a little more in the Halloween spirit than me, but I do belive these men will be on this earth only a few more years at best since we are all mortal. And I do believe people that are given great responsibility and power to help others and they do things they must hide from the law are risking burning in the pits of hell. There is my halloween connection. Why would anyone trade the kind of things these men trade for only to have an eternity in the bowels of hell as their ultimate payoff?

I agree, the curse these people visit upon themselves and the community is what they will burn in hell for. Yes, that will be their ultimate payoff.

The trick is them selling their souls, their treat is eternity in hell.
I wouldnt want to be them, their souls are long gone.

Bruce Stratton and Mike Little will be getting it from behind by Saddam Hussein and Hitler in hell soon enough.

Good MORNING LIBERTY DISPATCH, HOW ARE YA'LL
I was looking at the comments today and have a QUESTION TO THE PEOPLE THAT IS RUNNING OUR LITTLE TOWN OF LIBERTY

( IF YOU DIED TODAY ) DO YOU THINK YOU WOULD HAVE EARNED YOUR TICKET TO HEAVEN WITH ARMS OPEN WIDE WAITING FOR YOU.

I am thinking of going trick or treating as Rusty Hight this year, but only because I would have to gain forty pounds in the waist to go as Chap Cain. I figure Lester Ray will want to drive me around,but he may objetc to my Republican ties.

You can see Mike Little in the picture holding his hat while he watchs people burn.

No, thats Mike Little stoking the fire under those who are burning

The Liberty County Commissioners from HELL will have a front row seat in Hell. They are already begining to get some heat.