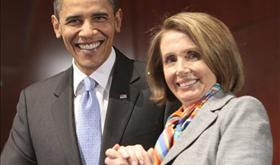 With absolutely no bipartisan support for the much-maligned Obamacare bill, the Democrats finally pushed the controversial piece of (crap) legislation through the House of Representatives at nearly 11 p.m. on Sunday night with a final vote of 219-212.

There remain a few procedural votes and the reconciliation process in the Senate to overcome, but for all intents and purposes, Obama will sign the bill and that will be that.

Where does the GOP go next? Is the rallying cry for November "To Repeal!"?
www.Townhall.com

Commentary: This "historic" vote was purely a straight line Democrat vote. What the Democrats have done to Republicans who are against the health care bill fiasco is this... they have soundly rammed this bill down our throats. Hopefully Texas and other states will sue the Federal Government to reverse the damage Democrats have done. What the Federal Government has done to us is a lot like what Bruce Stratton, Charles Kammerling and Picket have done to us via the Liberty County Hospital District and their related fraudulent front corporations. Come this November, we need to send a strong message to the Liberty County Democrat Party, one that will be heard all the way to Washington!

It seems the Good old Boy politics is all they way up to washington. I say change all out.

Well. I guess we will be taxed for a National Healthcare and then taxed for a local Healthcare. If the new OBAMACARE is no cost to the indigent people, then why would we need a Hospital District to pay for Indigent care? This is more of our TAX dollars going to our Government for the same kind of Liberty County Hospital District SCAM. I am with Ray, let's put an end to this BS in November. We need to get Nancy out and let her go home and retire, along with several more of these violin playing Liberals. (D.B.COOPER)

This health care bill is highway robbery, what the Liberty Hospital District is doing is rape.

Mr. Akins, my small business is going to suffer and so will the local economy because of Obama and Liberty County Hospital District. My wife and I are going to move out of the area, there is too much corruption in the Liberty County Courthouse and too many taxes. Why should we be taxed twice for healthcare in Liberty County. See ya...

That picture you put on the story says it all, those gloating snakes, I can almost see their forked tongues sliding out.

the bill only
promises health
care insurance
will be OFFERED
to those with
pre-existing
conditions.
It says nothing
about how many
tens of thousands
that they can
be charged!
That's how life
insurance works
too. You'll be
accepted, but at
a price nobody
could pay.

Yes, you will pay because this new healthcare insurance is mandatory. You will take it, pay for it and like it or be fined. We will be paying for this new Healthcare, Liberty County Hospital District healthcare and Medicare healthcare that is witheld from your payroll check. Then when you retire and get Medicare, our Government will hold out $110.00 per/month from your Social Security Check to pay for your medicare. Socialist Security at its finest. Just think you will be charged three times for Indigent Care. Highway robbery indeed. I will do my part to stop this in November. I am also now trying to find a way out of Liberty County as a lot of my friends are trying to do.

A vote for aDemocrat, any Democrat, helps to strengthen the clan in Washington's resolve to move away from free market capitalism and representative democracy towards socialism. No exaggeration, just fact.

over a dozen states'
attorneys general have
filed suits, claiming
overreaching of the
commerce clause of
the constitution, and
a violation of states'
rights-in federal courts.
More power to them.

I watched the evening news yesterday and see that 10 of our Representatives have had threats against them. They have the FBI and other security for their protection. There are people out there that will do things like this, because the people are getting tired of being taxed to death and things now being crammed down their throat. The way to show protest to all this crap is at the November elections. I think these elected officials will find out they have made the wrong decision when they are sent home in November.

I will protest it all in November. Cut the roots and the pant and it will not return.

I need a copy of this picture to put on a post in my garden, to scare the crows away. (HAWK)

I need the picture
for a dartboard

That is my same exact thoughtd D.B. Cooper.

I am a senior citizen and on Medicare. SS holds out $104.00 from my SS check every month for Medicare. My Question is; Do I now get on this new Obama Care plan and the SS quits with-holding my $104? Will the hospital Insurance Companies now be out of buisiness? Somehow I don't think so. If they are getting money from us, then they will make us stay on that plan.