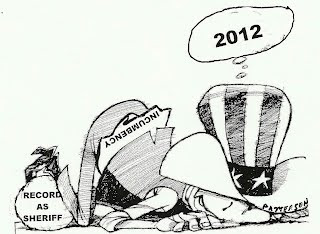 (Liberty, Texas May 29, 2012 - posted 7:01 PM) The people have spoken. In 2008 Henry Patterson promised voters across the county if he was elected it would be the end of good ole boy politics in the Sheriff’s Department. And he promised the people of Cleveland that his department would focus much of its attention on them. He hired men that had been rejected in Harris County and hitched his campaign wagon to people who did not live here. Tuesday, March 29th, after weeks of delay because of Democrat judges, voters in Liberty County finally voiced their opinion about Sheriff Patterson’s performance the last three and a half years.

Incumbents are often difficult to beat. They have the advantage of being able to make and to shape the news. So some will call the results of this race an upset, but voters were aware of the leadership problems in the department and they have waited for the election to vote for a change. Liberty Dispatch wants to thank all of those who read and/or contributed to postings that pointed out the problems with Patterson’s administration and his campaign strategists.

Voters have decisively chosen Bobby Rader as the next Sheriff of Liberty County. Rader is not scheduled to officially take office until January 2013.

Well Eddie you "expertise" has infected the county again. I guess Henry really appreciates your help.

Patterson was too political and allowed political people to manipulate what he was doing as sheriff. Good ole boy politics should not be tolerated, and was not tolerated, by Republcian primary voters.hun

Why in the world would you choose a cult like group from outside the county to help you? I voted just as enthusiastically against you this time as I did for you last time.

Anyone or heard from Robert Valdez or James Farmer?

This ought to be a marker for Republicans. Do your job or Republican primary voters will send you home.

So Eddie Showbeggar what is next?

Congratulations Bobby! You will be a great sheriff!!

Outsiders get obliterated! Farmer was toast, too.

When does Patterson take office as head of Cleveland PD? I understand that he and his financial man met with the mayor this month, about that very thing... (she never did have any brains, when it comes to screening applicants)

Congratulations Cleveland on your next new Police Cheif. Well Henry, I guess you are scratching you head with one hand and something else with the other hand trying to figure out what went wrong and what you have done wrong. 1st. You were a NO SHOW for anything. 2nd. You were hiring all outsiders to run thing for you. What else?

financial man? Harry Williams and Chris (son-in-law) were some of Patterson's worst baggage. Need we list them ALL, again? For an INCUMBENT to lose by a 2 to 1 margin, not even causing a runoff, suffice it to say: the voters have spoken, LOUDLY!

Analysis: Bad month to be a Cleveland top cop!

* Cleveland resident, and sheriff Patterson, creamed in the primary!

stay tuned, for the domino effect, in all three departments!!!

and what in the hell are we going to do about pickett?

want to win the runoff? Put your opponent's sign in his yard! lol

It looks like Patterson will be coming back to Cleveland with a clean house!

Patterson was pounded into the ground, what an embarrassment for him. His buddies were allowed to pick political fights with his campaign... STUPID and sealed his loss.

If I was Patterson, I would arrest Showbeggar and his buddy Valdez as soon as possible.

I wish that too, but neither are within his jurisdiction.

Tune of: Bye Bye Blackbird, (and
dedicated to our former top cops):

The (one and only) SONGWRITER

I am glad rader is in and I know that he will do the right thing and keep the men and women that have been working their a** off under Patterson. Does not matter where they came from, let me remind all of you, that Patterson was one of us and look at the job he did(did not do). Bobby is not stupid and you hire people that can do the job regardless of where they were born.

never fails. Every change of command, here come the good old boys, claiming that "doing the right thing" is KEEPING them in power!

If that's your definition of the right thing, then Pickett's your man! He'll keep the entire Little entourage (including every slush fund beneficiary,) guaranteed!

You do realize that you have the right to recall your sheriff in Texas, right? Wisconsin tried to with their Governor.