LIBERTY COUNTY TRANSIT PLAN - Get on the bus! 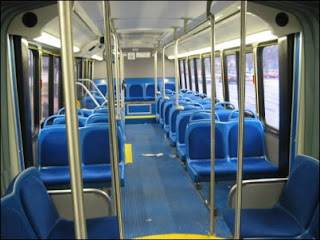 Recently, in response to complaints about government waste, Liberty Dispatch took time to review the “REVISED- 2009 H-GAC LIBERTY COUNTY TRANSIT PLAN”. Readers can view other documents by goggling the Brazos Transit Authority and compare their projections and reports with what we all observe on a daily basis and decide whether we have our own government boondoggle right here amongst us.
The Brazos Transit District, branded as The District, is the primary provider of mass transportation in a 16-county area of East Texas. The agency was established in 1974 as the Brazos Valley Transit Authority, with the primary purpose of providing fixed routes for Bryanand College Station, plus rural demand response service.
Back in the day this program was touted by Democrat Congressman after Democrat Congressman as a great solution to problems we would have as population grew and transportation became more of a priority or “need”. Attempts were made to expand the program several years ago, but the lack of funds has limited its routes in Liberty County (to 5 routes in Cleveland, Liberty, and Dayton). The district program has cost taxpayers millions of dollars since its inception and, though some may say the programs on self study justifies its existence, many observers may be less likely to trust the economic analysis and the amount of public good this program does.

“One time I actually saw four people on one of those buses. But one of them was the bus driver,” one commented.

Fully maintained buses and full time bus drivers are a large expense, and we need to look at and see if we can get the needs of some of our people with medical needs taken care of using other methods.

Get on the bus, come to Liberty Texas and get free taxpayer funded medical treatment!

I saw that, here they are:

Liberty County, bend over and spread you butt cheeks and get ready to receive.

The last post sounds like a BOHICA (Bend over Here it comes again) If you have a LONE STAR card, you can ride the free bus, get free Medical and free groceries all at the same time in Liberty Texas.

It is the only way I have to get my 94 year old mother to her quarterly dr. appts. The last time we used it, she had to wait 3 hours in the dr. parking lot waiting on the bus that for unknown reasons did not follow their route. When I asked why, the driver just shrugged. This was the second time this has happened. The first time the driver just zoomed by us even though I was waving my arms at him when I saw he wasn't slowing down. I don't know what I will do, but I won't put my mother on that bus again. We need a dr that makes house calls.

Why have we sat back and funded all of this when we see with our own eyes it can be done better.

what they would never listen to, was the idea of doing something that's actually useful. Like providing transportation down hwy 59, to connect to the metro park and ride lots in Kingwood, or having the VA Lufkin bus, stop at Cleveland WalMart to pick up our veterans too.
Same for the idiots who designed the Cleveland bypass, with no connection to or from the northbound hwy 59 lanes.

Some of these people that were thrown out of office must have went to work for TXDOT. Look at that overpass on hwy 1960. I haven.t stoped there for a train in years. That overpass should have been on Hyw 90 @ Dayton. Hyw 770 South out of Raywood was just redone and now it is falling apart again. Oh well it's not their money they are spending.

I don't know why I am wasting my time commenting on this. I have been wondering why we need this joke for years. Anyone who rides that bus probably has many relatives that have cars. Even most so called poor people have transportation. Just more for us taxpayers to pay for.

you commented and you have encouraged all of us who feel the same way.