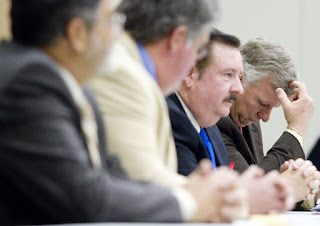 Many of us in Liberty County cannot forget the illegal activities after Hurricane Ike that embattled previous County Judge Phil Fitzgerald and ended in indictments and plea deals. Let's not forget Commissioner Groce and his buddy, Winston Sizemore, who reaped over $8M in cleanup contracts from the 'deals' that were made between them either. Least of all the reward of Groce's fully paid Vegas trip to Sizemore's wedding afterwards. 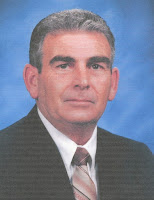 "It began with hidden camera video of trucks belonging to Liberty County Judge Phil Fitzgerald. We followed the trail to Lavernia, Texas, and the judge's brother-in-law.
Turns out Judge Fitzgerald and his family was paid up to $1 million. And the guy who got another big Liberty County contract was Winston Sizemore, Life-long friend of County Commissioner Lee Groce. Sizemore paid for the commissioner's trip to Las Vegas to be at his wedding." - http://poe.house.gov/1999/11/following-the-money-trail-after-ike

"When we asked Groce if he had a problem showing us receipts for travel and hotel records, Groce replied, "I have no receipts. I just don't."

That's because Commissioner Groce didn't have to pay for the trip. The groom picked up the tab. His name is Winston Sizemore.

"He's a lifelong friend of mine. He has been a friend of mine for my whole life and we would have went anywhere to get him married," said Groce.

We asked about the trip to the Strip because Sizemore's company got an $8 million contract to clean up Hurricane Ike debris in Liberty County last year. He was handpicked by Commissioner Lee Groce." - http://abc13.com/archive/6845243/

It seems Bailes was given $8,500 from Mr. Sizemore in his quest for the HD 18 Representative seat in the current race. Liberty Dispatch continues to question, why is Bailes so connected with bad company from Joe Strauss to John Otto, and a man who made questionable profit from a disaster that ended in criminal charges for Fitzgerald and Groce? Mr. Bailes continues to ask us to look at the company a man keeps. Perhaps he should be looking in the mirror? - http://votesmart.org/candidate/campaign-finance/166530/ernest-bailes#.Vx5mjvkrK1s

Why is this important?

Texas Farm Bureau is a leading voice for amnesty on illegal immigration.

"The American Farm Bureau Federation and its local arm, the Texas Farm Bureau, are strong supporters of a major immigration reform bill the U.S. Senate passed last year that offers a pathway to citizenship for undocumented immigrants. The bill has been heavily criticized by many conservative politicians, both nationwide and in Texas, highlighting a rift between the Republican Party and the agricultural lobby that widened recently during debate over the farm bill.

U.S. Rep. Lamar Smith, R-San Antonio, proposed forcing employers nationwide to use the controversial E-Verify database, a federal service that checks to see whether someone is eligible to work in the U.S. Farm lobby groups predicted tens of billions of dollars in losses for their members. Similar efforts in Texas have also failed.
“All we have to do to put agriculture out of business in this country, you do two things,” Pringle said. “No. 1, you implement E-Verify. And No. 2, you don’t provide any kind of legal opportunity for a workforce.”"-Texas Tribune, 2/27/2016

Remember, Mr. Bailes is proud of his  lobbyist credentials. He has lobbied on issues most Conservatives stand firmly against. The Republican Party clearly does not support amnesty or illegal immigration, both of which Farm Bureau seem to lobby in favor of.

We stand firm in our belief here at Liberty Dispatch that Mr. Bailes simply has too many connections to non-conservative organizations as well as the shady underbelly of Liberty County politics. We've been through these issues with the corruption in the past in Liberty County, let's not make that mistake again.

Shame on you Bailes, your corrupt arse is showing now taking money from criminals...! And you want to represent us in Austin? How can we trust someone like you? Stay the hell away from Liberty County you creep...

Bailes is a carpet bagger from up in Shepard Texas, not even from Liberty County. I will vote for a Liberty County man, Keith Strahan for Texas rep dist 18.

Bailes is a democrat and always has been! Just like his close kin Alan Ross Hightower!