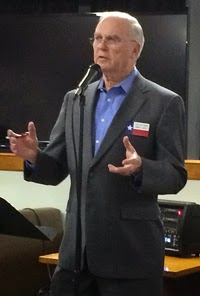 Acting on a late breaking tip we received, some of you may have noticed on our post last evening we added something about emails being sent out by Gayle Coleman, the current Chairman's wife, to those on the party list favoring one candidate in the HD 18 State Representative race over another. We removed it later after the original posting so that we could gather information and dedicate a single post to it. Here it is.

First, while Mrs. Coleman has every right to support whom she chooses and has every right to speak to that matter, it becomes an issue of class and tact over mean spirited actions. While Mr. Coleman is embattled in a brawl himself over misuse of his power and refusal to follow party rules, this action certainly doesn't come across well. It only lends more to the claims by some that the Coleman's, still upset by their power being challenged, are intentionally setting out to destroy one person's campaign over the other. The email sent out by Mrs. Coleman to a number of party members included a chart of the comparison of Mr. Strahan and Mr. Bailes. Of course, it was slanted showing Mr. Strahan in an unfavorable light.

So, what is wrong with this? It's a fair question.

Mrs. Coleman has been acting as the de facto chairman of the Liberty County Republican Party for months now. All official emails with needed information have come from her email address to all party members, in name, for Ken Coleman. We have several copies of all current party business and emails are being produced and sent by Mrs. Coleman from the same email address this email about the candidates came from. It doesn't take a huge step to understand why someone conducting official business of the party then turns around and sends those very same members a candidate favorable email might be a cause of concern. In fact, the last Facebook event for the Republican Quarterly Meeting wasn't even done under the name of the Liberty County Republican Party as usual. It was made and hosted by Gayle Coleman's personal page.

Now, Mrs. Coleman holds no official position in the party, and conveniently reminds everyone of this when she is questioned over some of her actions. Well, I guess we forgot the Chairman's wife gets Queen status...oh, wrong Country. Well, it is clear to see the party is under the firm grasp of nepotism in the thirst to control all messaging. The Chairman cannot have it both ways. Either Mrs. Coleman is serving in some role for the party and should be held responsible for this, or the Chairman has again failed in his duties. "This is official one day, this is her opinion another day" from the same account is unacceptable.

Perhaps this is yet one more reminder why so many have left the party and just have worked with other Republican and Conservative groups, or joined activism causes over serving the local party. This might be why the grassroots have abandoned the local party and sought other methods for electing candidates. Maybe, just maybe, this kind of under-handed business is why there was such a backlash at the recent County Convention against leadership.

We have decided not to post the email sent yesterday by Mrs. Coleman in reference to Mr. Strahan. We do have the copies if needed, and as always, can provide to anyone who asks.

Sad to hear Mrs.Coleman thinks she owns the minds and votes of the party. Her actions are the very reason people are so upset with the Republican Party. The party has an "ick" factor because these people are power hungry and control freaks. Hopefully, after this election we will see some change when these cancers are cut out of our GOP. Good work LD, stay on the toilet handle and keep flushing.

If it's Brown, flush it down! Lol

Soon these creeps will be gone and the ones left will be powerless and too humiliated to do anything. I saw good riddance to bad rubbish.