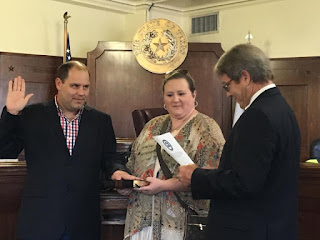 As the new leadership begins moving in, Liberty County prepares for its long standing home advantage to the State  Representative to be moved to another home county in the district. Perhaps this is a good thing in one light as it gives the new leadership in the local party time to rebuild what was burnt to the ground by the outgoing leadership. In this unique instant, Liberty County GOP can rebuild with more than a system of old Democrats running a conservative party. Chances of voter outreach and building of coalitions can begin without the added pressure of a sitting State Rep. being in the business of the party as well as a senior staffer of said Rep. serving as a party official. On the other hand, comments by incoming State Rep. Bailes of "I don't need the Liberty County Republican Party" upon invites and new leadership reaching out to him,  may come back to haunt him in time.  Ernest Bailes was the clear winner in the runoff. As such, the office and Ernest himself, deserves respect. However, if the one holding that office doesn't respect the enormous gift given to him to represent an entire district, whether he agrees with them or not, will only cause hurt feelings of primaries to linger instead of moving on with the people's business.

Either way, Mr. Bailes has a grueling first session coming up. Like it or not, like the individuals or not, Liberty County and HD 18 in general has strong grassroots activists that work the legislative session very hard. That includes people in San Jacinto, Liberty and Walker Counties. The groups vary from Republican Clubs to Tea Parties and others. The key is they all work together for common Conservative advancements over infighting. Their connections flow through many Representatives and Senators besides 'needing Mr. Bailes' if the tables are turned and his attitude is returned to him. If only some put as much effort in battling liberal agendas as they do in fighting each other with the same beliefs, great things could come out of the new leadership in the Statehouse and the local party.  Simply listening, with respect, even if Mr. Bailes disagrees with the context and principle, will go a long way to serve him and all of HD 18 Republicans. After all, running in two years with a record, conservative or not, will make a lot of difference.

Liberty County also embraces new Republican leadership and Democrat leadership in each party here as well. New times and new strategies are needed. An active Democrat party may be in the beginning stages here. While Republicans have claimed a solid red plot in Liberty County, do they do so in principle, or only in riding the Anti-Obama wave? It's a valid question. To say finding Republicans that were so long before the change is an understatement. In fact, they can be counted on less than two hands. Incoming leadership finds itself in a new cycle where they will have to stand on their beliefs and platform and hope the voters in this county have truly opted into conservatism and not Democrats who simply like guns and dislike abortion. In effect, some of those old Republicans that left the party in disgust during the Lester Ray and Coleman years may need to regain some strength and return to fighting for Conservative causes. Something the last few chairs have not had to do.