The Great Conspiracy: by Andrew McCreight

The Democrat Party has demonstrated a Win at all Cost strategy to create a Oligarchy.

1. Government of the few.

2. A government in which a small group exercises control especially for corrupt and selfish purposes.

3. An organization under oligarchic control. The country is an oligarchy.

Implications of the Firing of Andrew McCabe: by Andrew McCreight

It is time for the Robert Mueller Investigation to come to an end.

The Firing of Andrew McCabe tells the tale of what has been going on at the FBI and the Special Prosecutors Office concerning the investigation  of Collusion between the Russians and the Trump Organization. The tale is that no collusion exists. The tale is that the whole matter was dreamed up by the Hillary Clinton Campaign, Barrack Obama, The FBI and the DNC. We are tired of the lies (it has been found that McCabe has lied under oath) that have been the driving force to attack President Trump.

It is time to put an end to the attempt to Over Throw The Government of the United States by the Deep State and the Democrat Party.

We who elected Donald Trump are outraged by the slow rolling of the investigation into the corruptness of the FBI and the Special Counsel!

Facebook criminal Troll Mike O. Smith has been the subject of past posts here with his Felony conviction. Felons are not uncommon but ones who campaign for local candidates are. Mike O. Smith is in fact a convicted Felon and he is campaigning for Donna Brown and Mark Beausoleil. If Mike O. Smith being a Felon and representing those two candidates isn't enough, he is now offering people money to vote for them. Of course his actions are indicative of the acts of a Felon so no big surprise here. You can safely assume you can collect your money from Mike O. Smith, Mark Beausoleil and/or Donna Brown. Please see below... the new Facebook screen shot and his criminal record. 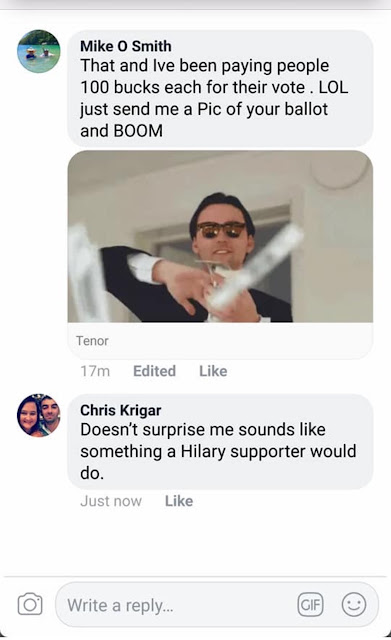 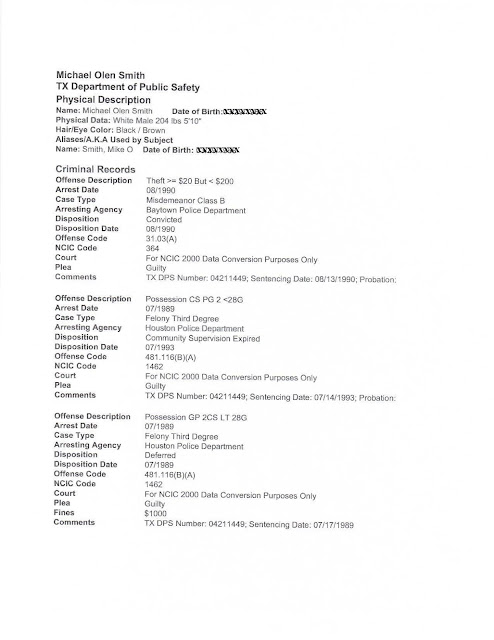 What is the significance of this category assignment? Speaker Straus has been criticized as an anti-conservative political figure in Texas Politics. Therefore  Rep. Wayne Faircloth falls into the same mold as the departing Texas House Speaker.

After reading the Article I surmise that the reason for the Texas House Speaker's departure is because Conservative Law Makers such as Gregg Abbot and Dan Patrick have given him a run for his money in the pursuit of Political Control of the Texas Legislature. That being a surge to the right of the political spectrum in Texas Politics. Having said that (electing a supporter of Joe Straus such as Wayne Faircloth) will not serve the best interest of Texas Conservatives. The election of Wayne Faircloth will not serve the best interest of Texas TParty Patriots. The 2010 wave election that flipped many counties in Texas from Democrat to Republican will begin to wane if we do not elect more Conservative Politicians to the Texas House and Senate.

I give a full endorsement to Conservative Mayes Middleton in Texas House District 23. We must continue to elect Conservative Candidates and not Re-Elect politicians who are Republicans In Name Only as exemplified by the support of Texas Speaker of the House Joe Straus by Wayne Faircloth.

P.S.
I strongly urge the voters in Texas House District 18 to vote for challenger Emily Kebodeaux Cook instead of Pro-Texas House Speaker Straus-Ernest Bailes. Let's set a trend and replace Straus Supporters with a new brand of Texas Politicians. IT IS TIME FOR A CHANGE!
2 comments:

Turning Point of the Republic: by Andrew McCreight

It has become quite apparent that Attorney Jeff Sessions is a clear and present danger to the continuance of the Republic. He is a danger for allowing the Deep State to continue the onslaught against President Trump. Sessions has sat on his hands and allowed Special Prosecutor Mueller to step outside the boundaries of his assignment. Mr. Sessions has also allowed Rosenstein to continue his attack on the Trump administration from the start by signing a continuance of the FISA document that started this crap in the first place.

As an American who voted for President Trump I say ENOUGH IS ENOUGH!

If Jeff Sessions will not appoint a Special Prosecutor to investigate how the Deep State (Mueller and Company) manipulated the FISA COURTS, then he should be fired! I call on members of the House of Representatives and the Senate to Petition the President to fire Sessions, Rosenstein, and Mueller. Members of Congress put your name on the line and give President Trump the strength to fire these people without retaliation from Congress!
No comments: