Adam Schiff is one of the most insignificant human beings that has ever occupied space on planet earth.

I cannot believe that the Democrats are allowing this Political Animal to drag them down into the political abyss. He is the worst example of what a politician should be. He is loyal to himself only. I do not believe that he has the best interest of the country at hand.

I do not care what comes out of the Impeachment Proceedings. I will henceforth an forever support President Donald Trump. He has turned the Washington Establishment on its head.  He has done what no President has done before. He has created a Super Nova Economy. He has lifted more people out of poverty than any Human Being that has ever existed. He is a champion of the military. He has taken back control of World Events instead of bowing to foreign Leaders. He is making our Allies and Foes pay for play...ie...we are no longer having to shoulder all of the financial burden to keep Europe and the rest of the planet safe. HE IS DRAINING THE SWAMP!

As for as Quid Pro Quo goes when it comes to Ukraine, SO FN BE IT!

I want to know who was behind the corrupt attack on Candidate Donald Trump's campaign for the President of the United States. I want to FN know if Joe Biden's son was paid off and by whom. I want to know if Joe used the power of the Vice Presidents Office to Protect his Son. I want to know if the Ukrainians helped Hillary Clinton with the rotten no count Russian Conspiracy Connection that was never proven by Mueller, Comey, and the Deep State! I want just one of these sorry ass bastards to go to jail and prove to the American People that Justice is not a one way street. It is OK for democrats to go to jail!

I can say bad things about Democrats because in my younger years I was one.

But F'em now!
No comments: 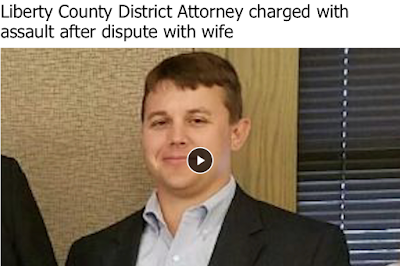 HOUSTON, Texas (KTRK) -- The Liberty County District Attorney has been arrested for assault in downtown Houston. Logan Pickett, 38, was taken into custody Saturday morning at the Westin Houston Downtown hotel, according to Houston police.

Pickett's wife told the hotel front desk clerk that she and her husband were at an event at Minute Maid Park and went to dinner before returning to the hotel. She said she found out after dinner that Pickett had been having an affair for the past 15 months, according to police, causing an argument to begin. That is when police say he pushed his wife, causing her to hit her head. Medics on the scene determined she needed three stitches to close her wound, but police say she refused medical attention. Pickett is charged with assault against a family member, a class A misdemeanor.

After confirming that the couple was attending an event, Pickett told police he had nothing more to say. Pickett was sworn in as the Liberty County District Attorney in 2013. He graduated from South Texas College of Law in 2006, according to the Texas Bar Association.

LIBERTY COUNTY WAS WARNED ABOUT PICKETT BACK IN 2012

Congressional Republicans should hold an informational meeting-Outside the Schiff Show! :by Andrew McCreight

After watching the Impeachment Hearing Fiasco, I would like to ask the Republicans to hold informational meetings such as the Town Hall meetings they hold individually in their home districts.

Let the American people hear from people who are not Democrat Operatives.

After the informal hearing, I want President Trump to fire Kent and Taylor and any other Obama hold overs that are still in the Trump government.

THIS IS OUR TIME!